Cipriano Mera and the Battle for Madrid 1939 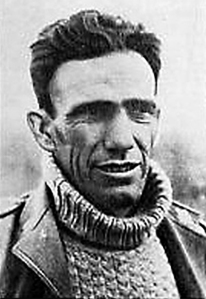 The piece below is from the D.i.Y.CULTURE#10 | The Anarchist Revolution – Then And Now edition.

PLEASE NOTE – For the best viewing experience, we recommend that you download the PDF of DiY Culture No.9 from DropBox to your PC/laptop/phone.

While the anarchist clash with the Communists and Republican government during the ‘May Days’ 1937 in Barcelona is relatively well-known, this does not apply to the fighting in Madrid in 1939. The anarchists of the FIJL (Libertarian Youth) and FAI (Iberian Anarchist Federation) lost the battle in Catalonia, and the revolution was put aside in favour of winning the war against Franco’s Nationalists. The CNT Ministers exited the Republic government and the POUM Trotskyists were exterminated.

Cipriano Mera was a CNT Construction worker leader in Madrid and a leading FAI member. In 1936 he led an anarchist column before becoming commander of the 14th Division. He reluctantly agreed to the militarisation of the militias as the only way to create an army strong enough to defeat fascism. The Division fought in the battles of Guadalajara and Brunete (against both the Italian and Spanish fascists) in 1937 and the following year he became commander one of the four army corps defending Madrid.

But in 1938, a huge Nationalist offensive split the Republic in two, and rapidly overran the anarchist heartlands in Catalonia right up to the French border. Thousands fled into exile. The French and British had already dealt the Republican cause a huge blow at Munich by supporting Hitler’s annexation of the Sudetenland, and this was now followed by recognition of Franco’s regime in February 1939.

Only Madrid and 30% of Spanish territory remained in Republican hands, and it was clear that the Civil War had been lost. Yet the Republican government under Negrin, largely controlled by Communists loyal to Stalin, called for a ‘fight to the death.’ But the Spanish Communist Party (PCE) clearly had other plans for themselves, as loyal party members were suddenly put in charge of all the evacuation ports along the coast.

This spurred the non-Communists to act. On 5 March 1939 the commander of the Republican forces ousted the Negrin government and formed a National Defence Council (NDC) comprised of non-Communist Republicans, including the CNT. In the hope of being able to negotiate an end to the fighting and save lives, the NDC quickly began to arrest the diehard Stalinists, but Negrin and his associates escaped.

Yet there were still three army corps located around Madrid under Communist control, and on 7 March 1939 they seized the city, executing some Republican commanders.

The fate of Madrid now lay solely in the hands of Cipriano Mera’s IV Corps whose anarchist and Republican troops remained loyal to the NDC. They counter-attacked. After three days of fighting they had surrounded the Communist forces in the city centre. In hard street fighting the next day Mera and his anarchist and republican troops defeated the Communists, executing their commander and his commissar. Up to 2000 soldiers died in this civil war within the Civil War.

Despite the hope of negotiation with Franco (in order to prevent more reprisals and spare Madrid) he demanded only unconditional surrender and went on the offensive with overwhelming force. There was no longer any Republican will to sacrifice lives uselessly and refugees rushed for the coast. But the Republican navy had fled. British ships evacuated only a few hundred of the many thousands desperate to escape.

Cipriano Mera made it to Algeria, but was extradited by Vichy France in 1942. Although initially condemned to death his sentence was commuted to 30 years, Upon release he went to France where the remnants of the CNT and FIJL still operated in exile and he remained in contact with the new generations of anarchist militants as well as the old. He died in Paris in 1975, just one month before Franco.

Cipriano Mera was one of the few anarchist commanders (like Makhno) to fight both fascists and communists, and win battles against both. While his last battle was only a minor victory over the Communists, it probably spared the destruction of Madrid and thousands more dead in needless fighting. It may also have saved his own life by being a factor in having his sentence commuted. The thrilling story of his life is told in a 2 hour documentary now available online.

The Bonnot Gang were the most notorious French anarchists ever – folk-heroes, bank expropriators the inventors of the motorised getaway. It is the story of how the anarchist taste for illegality developed into illegalism. Get hold of a copy, it’s a page-turner!

Angry Workers of the World